Kidnaped and Deported - One Polish Catholic's Story from the Holocaust 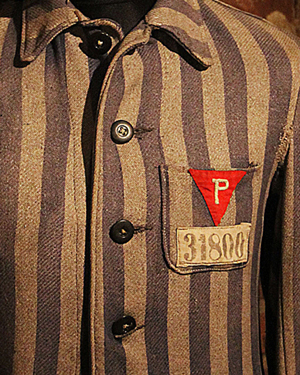 More than one million Poles were deported to forced labor camps in Nazi Germany. There are no books, nor data showing the number of people who were murdered in those camps. Those who survived remember how cruelly they were treated. I am one of them. I have lost my young years and health over there.

When Germany started the war, they mobilized every young German into the Nazi armed forces. There was a shortage of laborers at home. At first, they appealed to Poles to go and work in Germany. Some Poles went, since they had no means to survive in Occupied Poland. Later, the Germans applied forced deportation for work. They kidnaped young men and women in the street, in the marketplace, and in front of churches on Sundays. Special camps were set up for Poles, separate ones for men and others for women.

I was kidnaped on a street in Tarnow in April 1941, pushed into a goods wagon and transported to Germany. Three days later, the train stopped in Braunschwieg. We were told to leave the wagon. Here we were met by other Germans who were choosing people for work they needed done. I was assigned to work for a firm that was building underground shelters for Germans in the neighborhood of Wattenstadt, where a huge Herman Goering factory was located. The work was exhausting, 10 hours a day, six days a week, often even on Sundays. Older people were dying of exhaustion. The camp was surrounded with barbed wire. It was administered by Germans. Every morning we were divided into groups and led to work under strict supervision. After work, a bowl of soup and microscopic cube of margarine and bread was given. This was the only meal for the day. We felt hunger all day long. Every morning, we were so exhausted that we could hardly move. A brown leather whip was used to make people work faster.

We were liberated by the American Army in April 1945. Displaced Person Camps were created and organized. Now, children were able to begin their education in schools in the camps. On Sundays we were finally able to attend the Holy Mass. People were given jobs. We lived in the same barracks as during the war. Some people lived in the previously military buildings. I taught school in a D.P. camp, organized scouting, helped the priest in the chapel, and worked in the office of the Polish Displaced Persons Camp.

I arrived in the United States in 1950, and settled in Derby, Connecticut. Since 1966, I have been organizing exhibits and showing films, spreading information about Polish history and culture. In 1990, thanks to the Kosciuszko Foundation of New York, I was invited by the Holocaust Committee to Washington, D.C. to describe my experience in the Nazi camp. The interview was recorded and may be seen on video in the Holocaust Museum in Washington, D.C.

I gave my documents showing my work as a forced laborer in Nazi Germany: my identity card, food stamps (which showed my number and date with large "P" in the background). A part of the stamp was to be turned the kitchen to obtain a meal. Every Pole had to have the letter "P" sown on clothing. It was forbidden for Poles to ride in busses, trains, to enter a restaurant or theater.

My letter "P" can be seen in the Holocaust Museum (3rd floor). There is also a list of persons (including my name who contributed to souvenirs from the forced labor and extermination camps. I also donated 20 books on Polish experiences during the German occupation: Warsaw Upheaval, Ghetto Upheaval, Forgotten Holocaust by Richard C. Lucas, and a documentary book Martyrs of Charity by W. Zajaczkowski. In the last book, there are hundreds of names and localities where Poles were murdered for helping Jews.

My name is also included in the computerized television list of donors to the Holocaust Museum. This may be seen on the first floor. In the Wexner Learning Center, on the second floor, there is a computerized system of persons who survived and reported their experiences.

The Museum is located in the area of the Smithsonian Institute at Independence Avenue. There are many exhibits showing concentration camps, photos and various souvenirs. Among them, there are exhibits related to Poland: the German invasion of 1939; execution of Poles in Bydgoszcz and other places; there is an actual-size replica of a Polish border gate with the emblem of the White Eagle. There is the original train wagon used by Germans for transporting Jews to the extermination camps. The wagon was donated by the Polish government.

On a white long wall, there is a list of heroes who helped Jews during the occupation of Poland and other countries. On the list there are more Polish names than any other ones. There are also films in which Jews give the names of Poles who hid them in their homes, which was punishable by death. True, some exhibits show only half-truths, and that offends those of us who survived and knew the real situation under German occupation. For example: sometimes, the terrorized Poles transported Jews to the camps. Refusal to comply with their orders was punishable by death.

The museum was built to show the next generations the horrible crimes committed by Germans against Jews, Poles and other nations: it is built to prevent the repetition of such crimes; there is a need for the reconciliation between Poles and Jews; but the film "Shtetl" just increases the animosity between these two people. I would advise people to visit the museum, and send their remarks to the Polish American Congress. I attended the opening of the museum in April 1993. Later, I gave three interviews to reporters of dailies in Derby, New Haven and Bridgeport, Conn. Lately my interviews were in the Polish newspapers, Nowy Dziennik and Narod Polski. I continue writing to Polish papers about the Polish Holocaust, since I witnessed the Polish martyrology. I have given many lectures on the Holocaust for various organizations. I thank God for my survival. Let's try to reconcile to prevent repetition of such horrors.

The U.S. Holocaust Memorial Museum was not built to stir up painful memories of World War II, but rather as a tool to educate generations of people in the hope that this will not happen again. In the Museum book store you can buy postcards illustrated with patches worn by Jews and Polish people showing how the Nazis isolated them and excluded them both from society. A copy of my "P" patch is shown on the postcard. The Museum also has a large poster of the same illustration.