"Zegota" also known as the "Konrad Zegota Committee," was a codename for the Council to Aid Jews (Rada Pomocy Zydom), an underground organization in German-occupied Poland from 1942 to 1945. It operated under the auspices of the Polish Government in Exile through the Government Delegation for Poland, in Warsaw. Zegota's express purpose was to aid the country's Jews and find places of safety for them in occupied Poland. Poland was the only country in occupied Europe where, throughout the war, there existed such a dedicated secret organization. 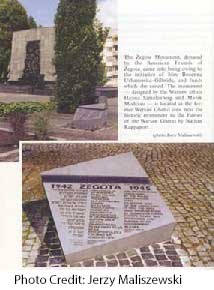 The Council to Aid Jews, Zegota, was the continuation of an earlier secret organization set up for this purpose, called the Provisional Committee to Aid Jews (Tymczasowy Komitet Pomocy Zydom), founded in September 1942 by Zofia Kossak-Szczucka and Wanda Krahelska-Filipowicz ("Alinka") and made up of democratic as well as Catholic activists. Its members included Wladyslaw Bartoszewski, later Polish Foreign Minister (1995, 2000). Within a short time, the Provisional Committee had 180 persons under its care, but was dissolved for political and financial reasons.

Founded soon after, in October 1942, Zegota was the brainchild of Henryk Wolinski of the Home Army (AK). From its inception, the elected General Secretary of Zegota was Julian Grobelny, an activist in prewar Polish Socialist Party. Its Treasurer, Ferdynand Arczynski, was a member of the Polish Democratic Party. They were also the two of its most active workers. Zegota was the only Polish organization in World War II run jointly by Jews and non-Jews from a wide range of political movements. Politically, the organization was formed by Polish and Jewish underground political parties.

Jewish organizations were represented on the central committee by Adolf Bermann and Leon Feiner. The member organizations were the Jewish National Committee (an umbrella group representing the Zionist parties) and the socialist General Jewish Labor Union. Both Jewish parties operated independently also, using money from Jewish organizations abroad channelled to them by the Polish underground. They helped to subsidize the Polish branch of the organization, whose funding from the Polish Government-in-Exile reached significant proportions only in the spring of 1944. On the Polish side, political participation included the Polish Socialist Party as well as Democratic Party (Stronnictwo Demokratyczne) and a small rightist Front Odrodzenia Polski. Notably, the main right-wing party, the National Party (Stronnictwo Narodowe) refused to participate.

Kossack-Szczucka withdrew from participation from the onset. She had wanted Zegota to become an example of pure Christian charity and argued that the Jews had their own international charity organizations. She went on to act in the Social Self-Help Organization (Spoleczna Organizacja Samopomocy - SOS) as a liaison between Zegota and Catholic convents and orphanages, where Catholic clergy hid many Jews.

(Those with the asterisk (*) after their name have been recognized by Yad Vashem as Righteous Among the Nations up to the end of 1999.) 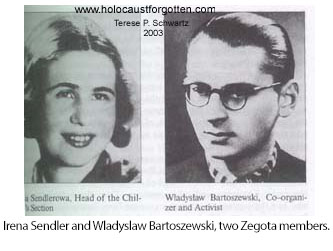 Zegota helped save some 4,000 Polish Jews by providing food, medical care, relief money and false identity documents for those hiding on the so-called "Aryan" side of German-occupied Poland. Most of its activity took place in Warsaw. The Jewish National Committee had some 5,600 Jews under its care, and the Bund an additional 1,500, but the activities of the three organizations overlapped to a considerable degree. Between them, they were able to reach some 8,500 of the 28,000 Jews hiding in Warsaw, as well as perhaps 1,000 elsewhere in Poland.

Help in the form of money, food and medicines was organised by Zegota for the Jews in several forced labour camps in Poland as well. Forged identity documents were procured for those hiding on the "Aryan side" including financial aid. The escape of Jews from ghettos, camps and deportation trains occurred mostly spontaneously through personal contacts, and most of the help that was extended to Jews in the country was similarly personal in nature. Since Jews in hiding preferred to remain well-concealed, Zegota had trouble finding them. Its activities therefore did not develop on a larger scale until late in 1943.

The German occupying forces made concealing Jews a crime punishable by death for everyone living in a house where Jews were discovered. Over 700 Poles murdered by Germans as a result of helping and sheltering their Jewish neighbors were posthumously awarded the title Righteous Among the Nations. They were only a small part of several thousand Poles reportedly executed by thefor aiding Jews. It is estimated that some 200,000 Poles were engaged in helping Jews even though the threat of death did act as a deterrent.

Zegota did play a large part in placing Jewish children with foster families, public orphanages and church institutions (orphanages and convents). The foster families had to be told that the children were Jewish, so that they could take appropriate precautions, especially in the case of boys. (Jewish boys, unlike Poles, were circumcised.) Zegota sometimes paid for the children's care. In Warsaw, Zegota's children department, headed by Irena Sendler, cared for 2,500 of the 9,000 Jewish children smuggled from the Warsaw Ghetto.

Medical attention for the Jews in hiding was also made available through the Committee of Democratic and Socialist Physicians. Zegota had ties with many ghettos and camps. It also made numerous efforts to induce the Polish Government in Exile and the Delegatura to appeal to the Polish population to help the persecuted Jews.

Many members of Zegota were memorialized in Israel in 1963 with a planting of a tree in the Avenue of the Righteous at Yad Vashem. Wladyslaw Bartoszewski was present at the event.

Zegota was the cryptonym for the clandestine underground organization in Nazi-occupied Poland that provided assistance to the Jewish people.

Amazing stories of courage and heroism by Poles like, Zofia Kossak, a devout Roman Catholic, and many others who put aside their religious and political differences to help their neighbors.

The Book: available through Amazon.com.

Zbigniew Brzezinski writes "Zegota is the story of extraordinary heroism...tantamount to 'Schindler's List' multiplied a hundred-fold."

The Documentary: Video available by mail order. A revised 28 minute program edited with newly available archival film footage. This film narrated by Eli Wallach, tells the story of the desperate plight of the Jews of Poland and the conditions of terror under which the Zegota rescuers tried to help. Stories of extraordinary courage of people who risked -- and some of whom sacrificed -- their lives trying to save Jewish fugitives.

To order: please mail check or money order to

The Zegota Monument, donated by the American Friends of Zegota, came into being owing to the initiative of Mrs. Bozenna Urbanowicz-Gilbride and funds which she raised.

The monument -- designed by Warsaw artists, Hanna Szmalenberg and Marek Moderau -- is located in the former Warsaw Ghetto area, near the historic monument to the Heroes of the Warsaw Ghetto by Nathan Rappaport.

The "Zegota" Council to Aid the Jews, established in 1942, appointed Sendler the head of its children's department. When the Nazis began destroying the Warsaw ghetto, Irena Sendler started a large-scale campaign to rescue the children who lived there. A total of 2,500 children were saved, brought out of the ghetto and hidden in Polish families, orphanages and monasteries. They received false identities and other help. In 1943, the Gestapo arrested Sendler, tortured her and sentenced her to death.

The Zegota council managed to bribe German guards and have Sendler released, and until the end of the war, she lived under a false name. After 1945, she worked at the social welfare department of Warsaw, contributing to the establishment of orphanages and rest homes for those who had lost their families in the war.

Sendler also managed the department of medical education at the Ministry of Health, where she put forward an initiative to open high schools for girls who wanted to become nurses.

In 1983, the Israeli Yad Vashem institute honored Sendler with the Righteous Among the Nations medal, and in 2003 Sendler received the Order of the White Eagle. In 2006, the Children of the Holocaust association and the American "Life in a Jar" foundation, with the Polish foreign ministry's support, established the Irena Sendler Award "For Healing the World."